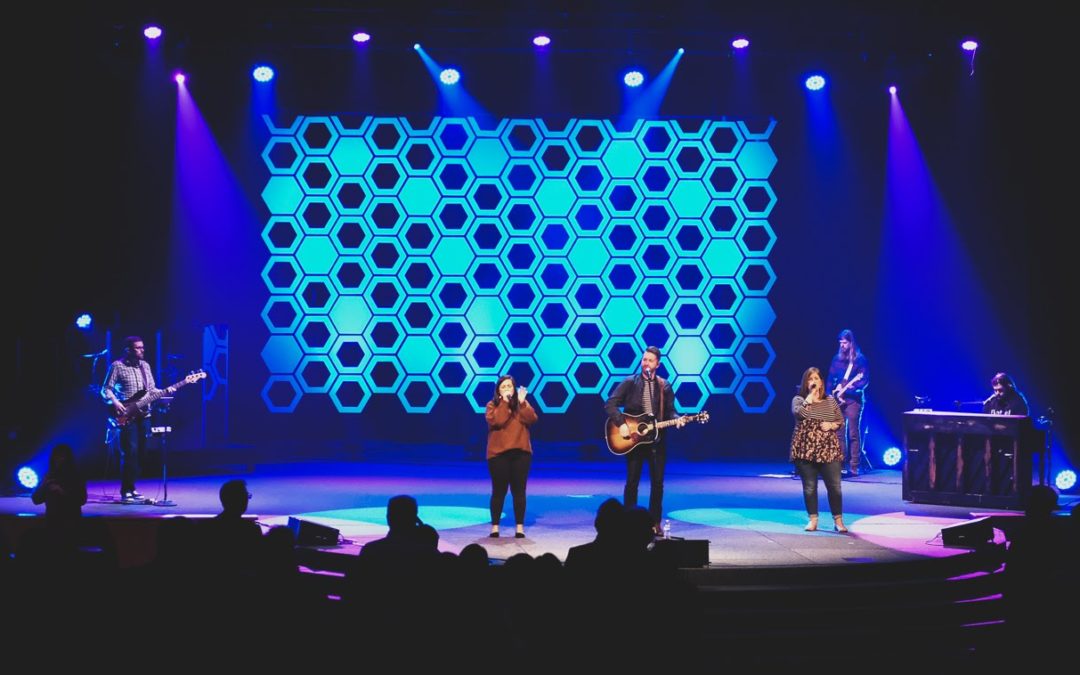 Hello, and welcome to episode 1 41 of the Mod Scenes podcast. I’m thrilled to be chatting with you today about stage backdrops. And today I want to do kind of a, a comparison of our products to another company called quest events. So quest events is a large company based out of they’re headquartered out of Dallas, uh, but they have locations across the country. Uh, so they do, uh, they do rentals of drapery, uh, and recently had gotten into stage backdrops and, uh, and we do, we do compete on a pretty similar level. So I want to actually kind of do some comparison and let you decide for yourself if it might be best to go with us, uh, go with Monsignor or potentially go with quest events. So, um, let’s get started with, uh, let’s get started with the products. So, uh, design, uh, I’m a huge fan of design.

Like I’m like a design nerd. Like I spend, if I could spend just all the time designing, that’s what I would do. Um, I love it. It’s really one of my passions. Uh, so, uh, you know, I I’m the primary designer for us and, uh, although I may be, I probably am somewhat biased because most people love, most designers love their own designs. Uh, we have gotten a lot of great feedback about our designs and that they are a really big selling point, uh, versus, uh, our competitors request events. So quest events is great, um, because they have a wide range of, uh, locations. So, uh, they’re pretty close to most, uh, major markets, which is something that we obviously are not we’re based in Norman, Oklahoma, but we ship, we do ship everywhere so we can easily get to any market. Uh, however, we are not just down the street, if you were looking to get something day off. We have the best stage backdrops in town!

Um, so, uh, one, one thing that I kind of, one way, I kind of think about the difference between mod scenes and quest events is, uh, in our approach. So, uh, monsoons approach is a very customized approach. So, uh, we’re here to, to a, hit your budget, uh, or to, to hit your budget, to, uh, get the design, the exact design you’re looking for and really customize, uh, your set to fit your exact needs. So sometimes that looks like just using stock products, able to, you know, hit a limited budget for a client that’s, um, you know, that you’re, you’re just trying to either one for the first time or a client that has a good client, they’re trying to do something different. You’re trying to help well now. Um, or if you’re looking to really brand stuff to make it look like a great, uh, you know, a great touch point for your client, make it something that’s really gonna make you stand out to your client.

Um, whereas a lot of quest events products are, uh, more of a cookie cutter type piece. So those pieces, uh, they’re great designs. Uh, the, uh, so those designs they’ll go through and they’ll, you know, they have a, uh, Ray of designs. Um, I believe they’ve got, uh, probably about 20 designs total, uh, whereas our catalog is closer to 50. Um, so that’s a little bit of difference. Um, but with ours, with our process, we can do customization same day. So if you’re looking to get, say, okay, we’ve gotten an event everything’s changed on us. We need some, uh, branding, uh, and a quick set to send out that day. Uh, we can actually make that happen so we can get it printed and sent out in quick fashion. Whereas through quest it’s a little bit more of a headache. Uh, they do some printing, but they don’t do custom CNC work.

So we’ll actually custom cut your client’s logo into the panel, um, custom cut across multiple panels to make a large scale logo. Um, so yeah, so that’s a, that’s a little bit of a difference there. Uh, so they use a similar material to ours. Uh, it’s a, it’s a, it’s a white material as is ours. Uh, they use a similar connector scheme, um, with, uh, bolts that are in their bolts are in metal. So they’re white painted metal that pushes through the back of the, uh, back of the panel. And then there’s a cabinet that Titans on the front. Uh, ours is similar. It’s actually, uh, we developed ours. Uh, we, we developed ours, uh, and, um,

We, we developed ours in house and it’s all, you know, it’s, uh, uh, it’s funny how, how close the comparison is even though, uh, even though we didn’t obviously talk about the stage backdrops, uh, the difference in the, we didn’t go through and plan to, uh, play plan to make the same thing, obviously. So, um, anyhow, there’s this, uh, made of a white painted metal with bolts that are in it. Uh, whereas ours is a clear plastic. So again, you can see through the connectors, uh, which gives us the added, um, option to do panels that kind of cut away the corners, uh, make it look like it’s kind of floating. Uh, another thing that we can, uh, that looks really great with that is we can do projection screens, uh, and you don’t have a giant white block, uh, in the corners. It’s a clear piece and you don’t even see it just disappears.

Uh, so yeah, so it’s a, it’s a comparison. Uh, so quest typically ships their sets in hampers. Um, so there’ll be boxed and then hampers, um, the quest, uh, rents panels per piece, uh, and then there’s a cost for hardware as well. Whereas our panels are the panel costs plus, and then hardware is included free. Um, let’s see, what else I can tell you? Uh, uh, yeah. Um, as far as hardware goes, so we have, uh, more options as far as hardware goes. We have some additional 3d towers. We have triangular towers where, uh, as quest only carries a square tower, uh, we also do, uh, 3d, uh, backdrop hardware, which will give you the added benefit of having kind of like a, uh, undulating type, uh, backdrop. It can kind of move back and forth, uh, with a 180 degree bent connector, I’m sorry, 15 degree bend connector.

Um, let’s see, what else? Um, yeah, and I mean, as with anything, um, you know, we obviously think our customer services, right. Uh, but I would, I would challenge you to, to check out our competition and check us out. So I would, I would reach out to quest events, get a quote, look and give a comparison between quest events and MATSITI. And I think you’ll see that, uh, our prices are, uh, actually lower. Um, our prices are lower, um, our services better. Uh, we have we’re the highest rated stage design company in the country. Uh, and it’s because we care, we care a ton about our clients and making sure that they see the success that they’re looking for. Um, so yeah, so I would, I would encourage you reach out to quest. Um, I’d be happy for, uh, I’d be happy to create a quote for, with our team.

Um, we’ll be able to, uh, get you a quote quickly, send it over and you can compare apples to apples. No, what, uh, no, what you’re looking at and know, uh, what’s the best fit for you. So, uh, I hope this is a helpful, a helpful little podcast of information about, uh, you know, looking at, uh, rental options of the stage backdrops industry. Uh, another thing to consider is depending on your length of time, it might be worth purchasing. And since, uh, and we’re currently the only ones in the industry to do that. So I’d love to chat with you about, um, about that and see how I can help you best. Uh, don’t hesitate to reach out, uh, can you can call us at (530) 723-6421, or you can email me and Steven or go to modscenes.com. Thanks again for, uh, thanks again for listening to Mod Scenes podcast. And I’m thrilled to chat with you about your stage backdrops to soon.